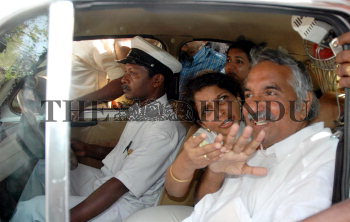 Caption : The Chief Minister Oommen Chandy waves to presspersons shortly after he landed at the Thiruvananthapuram international airport on February 02, 2006. The Chief Minister's wife is seen asking the policemen to clear a way for Mr. Chandy's car to pass Photo:S.Gopakumar