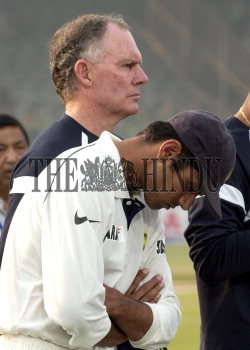 Caption : Captain Rahul Dravid and coach Greg Chappell of Indian cricket team seen at the presentation ceremony after the third and final cricket Test match at the National Stadium in Karachi, Pakistan on February 01, 2006. Pakistan won the third and final Test against India and also the three-Test series by 1-0. Photo: S. Subramanium Photo: S. Subramanium