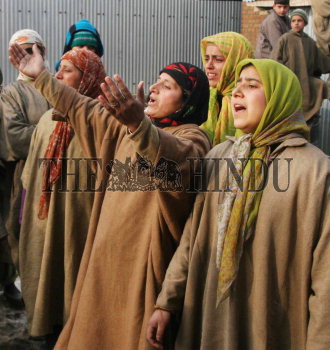 Caption : Kashmiri villagers carry the body of Riyaz Ahmad Bhat, a senior militant commander, during the funeral at his residence in Aglar, Pattan near Srinagar on February 01, 2006. A local News Agency reported that Bhat, a senior militant commander of Hizbul Mujahideen, a pro-Pakistan militant outfit, is killed along with another militant after they are arrested by the Army. However Army spokesman denied the allegation. Photo: Nissar Ahmad