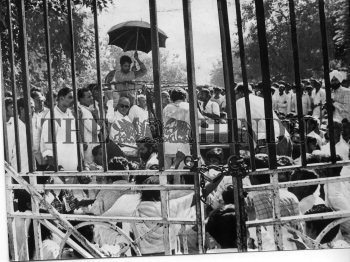 Caption : Mr. Jayaprakash Narayan seen seated outside the locked gate of the Patna Secretariat while leading the movement called by him to paralyse the administration in Bihar, a northern Indian State in October 1974. Closely associated with the Congress-socialist movement, Jayaprakash Narayan had led a movement against corruption in high places and emergency excesses to bring about an end to the Congress rule at the Centre for the first time in 1977. It was under his towering personality that different political parties came together under the banner of the Janata Party to provide the country its first non-Congress government. Jayaprakash Narayan had retired from active politics towards the end of the Sixties and devoted himself to the Bhoodan movement launched by Acharya Vinoba Bhave. He was called upon to provide leadership to anti-corruption crusade in Gujarat launched by Nav Nirman Samiti. Soon afterwards a similar movement gathered momentum in Bihar, a northern Indian State under his leadership and ultimately it led to the ouster of the Congress government headed by Ms Indira Gandhi. Narayan popularly known as 'JP` made his mark in the country`s freedom struggle as a front-ranking leader of the 1942 movement. He was closely associated with socialist school of thought within the Congress along with Dr R M Lohia. He was posthumously awarded the country`s highest civilian award the 'Bharat Ratna` on December 24, 1998. PHOTO: THE HINDU ARCHIVES