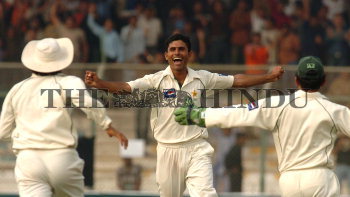 Caption : Pakistan bowler Abdul Razzaq exults after dismissing Indian batsman Irfan Pathan (not in pic) as stand-in skipper Younis Khan (left) and wicketkeeper Kamran Akmal rush to join him on the fourth day of the third and final cricket Test match between India and Pakistan at the National Stadium in Karachi, Pakistan on February 01, 2006. Photo: S. Subramanium