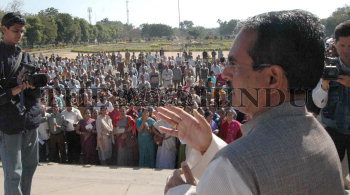 Caption : Madhya Pradesh Chief Minister Shivraj Singh Chouhan is seen along with State Government employees after singing 'Vande mataram' in front of Mantralay, Vallabh Bhawan, in Bhopal on February 01, 2006.This 'National Song' is being sung on the first date of every month in the Government offices throughout the State as per the directives of former Chief Minister Babulal Gaur led BJP Government's decision. Photo: A.M. Faruqui