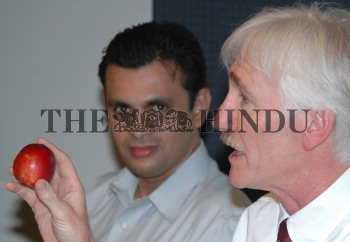 Caption : Glynn Ward (right), Research Officer-Horticulture, Department of Agriculture, Government of Western Australia, along with P.S. Krishnan, Head for South India of Australian Trade Commission, at a press conference in Chennai on January 31, 2006, on the eve of the launch of a two-week-long campaign to promote the Australian SUMMER fruits. Australia has planned to double its exports of SUMMER fruits to India this year. Earlier, 100 tonnes were exported, which would go up to 200 tonnes this year. The plan is to take it to 1,000 tonnes by 2008. For retailing the SUMMER fruits, the Australian authorities had tied up with Indian firms in Chennai, Mumbai and Delhi. Photo: S.R. Raghunathan