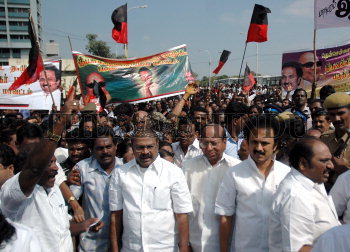 Caption : DMK partymen led by deputy general secretary M.K. Stalin, staging a demonstration, near CMDA office at Egmore in Chennai on January 31, 2006, demanding the resignation of Tamil Nadu Chief Minister, J. Jayalalithaa, in the light of the Supreme Court's adverse remarks on the handling of the MGR Nagar stampede issue (where 42 persons died at a relief distribution centre last December). Photo: M. Vedhan