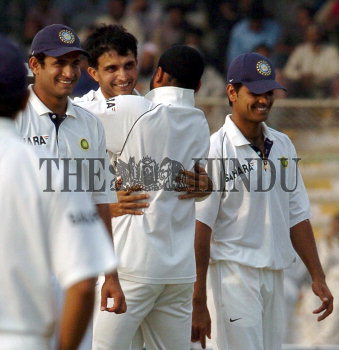 Caption : India's Sourav Ganguly gets a hug from teammate Harbhajan Singh for dismissing Pakistan batsman Salman Butt (not in pic) as Irfan Pathan and R.P. Singh (ext right) look on during the drinks break on the second day of the third and final cricket Test match between India and Pakistan at the National Stadium in Karachi, Pakistan on January 30, 2006. Photo: S. Subramanium