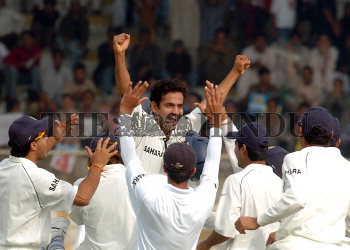 Caption : Indian bowler Irfan Pathan celebrates with teammates after completing his hat-trick by dismissing Pakistan batsman Mohammad Yousuf (not in pic), his third wicket, on the first day of the third and final cricket Test match between India and Pakistan at the National Stadium in Karachi, Pakistan on January 29, 2006. Irfan Pathan became the second Indian to record a Test hat-trick after Harbhajan Singh. Photo: S. Subramanium