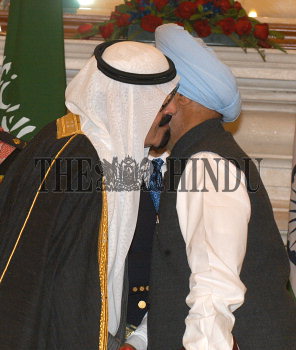 Caption : King Abdullah Bin Abdul Aziz Al-Saud of the Kingdom of Saudi Arabia, hugging the Prime Minister, Manmohan Singh, after signing of the 'Delhi Declaration' agreements at Hyderabad House, in New Delhi, on January 27, 2006. This is the first time in the history, that a King is making a Joint Declaration with any other country. Photo: Shanker Chakravarty