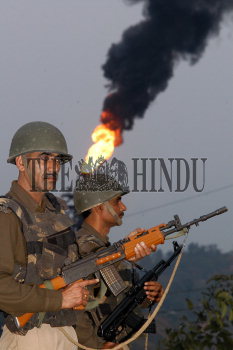 Caption : Security personnel of Central Reserve Police Force (CRPF) keep up vigil near the oil installations in Guwahati on January 23, 2006. Serial blasts by the suspected United Liberation Front of Asom (ULFA) militants since last three days paralised the security scenario in the Guwahati city, where one person was killed and more than twenty others injured, including a security personnel. More than eight blasts have been triggered off by the ULFA militants throughout Assam State in the last three days. Photo: Ritu Raj Konwar