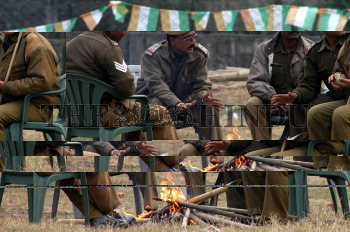 Caption : Security personnel deployed for the Gudge’s Field parade ground for the Republic Day rehearsal take a break to warm up as the cold wave continue in Guwahati city along with other northeastern states, on January 22, 2006 morning.Security of the oil installations including the pipelines passing through the vulnerable areas of the state has been beefed up in view of the recent attacks on the oil companies by the militants belonging to United Liberation Front of Asom (ULFA). Red alert has been announced throughout Assam to keep all agencies and public on alert. Photo:Ritu Raj Konwar