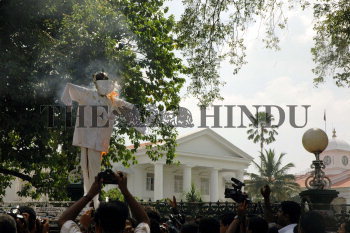 Caption : Volunteers of the Democratic Indira Congress (Karunakaran) burning Chief Minister Oommen Chandy in effigy before the Secretariat on January 18, 2006 demanding his resignation in the wake of the OBSERVATIONS of the Lok Ayukta. Photo: S. Gopakumarl