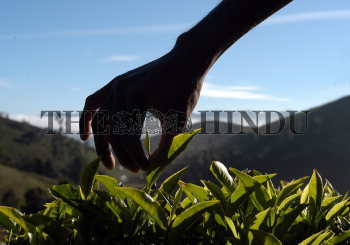 Caption : A tea plantation in Emarald near Udhagamandalam (Ooty) in Tamilnadu. Extensive damage to the tea crop has been reported by growers from various tea growing pokets of Nilgiri with frost hitting the low lying areas.Charring of leaves,stunted growth and drop in juice contet in leaves have led to an almost 50 per cent loss of the crop.Thalakundah,Emarald,Avalanche,Najanaad,Naduvattam,Kil Kotagiri and Kundah tea belts are among the worst hit areas from the frost attack. Photo: K.K. Mustafah 4/1/2006