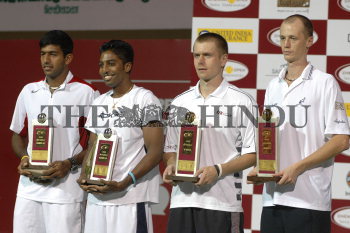 Caption : India's Rohan Bopanna and Prakash Amritraj hold runners-up trophies and Michal Mertinak of Slovakia and Peter Pala of Cezh Republic pose with the winners trophies after the doubles final of the Chennai Open tennis championship at the Nungambakkam Tennis stadium in Chennai on January 8, 2006. Photo: R. Ragu