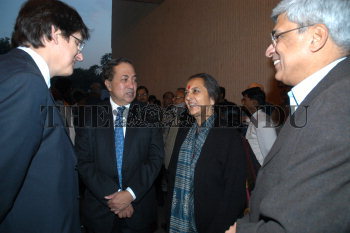 Caption : Editor in Chief of The Hindu N. Ram with Alan Rusbridger, Editor, The Guardian (left), CPI(M) general secretary Prakash Karat and Brinda Karat (second from right) prior to two lectures "Do newspapers have a future?" and "The news ombudsman -a visible presence , an independent voice", in New Delhi, on January 10, 2006. Photo:V. Sudershan