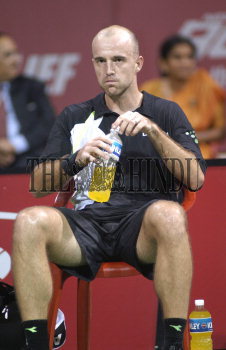 Caption : Coratia's Ivan Ljubicic looks on during a BREAK in the final against Corlas Moya of spain in the men's singles final of the Chennai Open tennis championship at the Nungambakkam Stadium in Chennai on January 08, 2006. Photo: Vino John