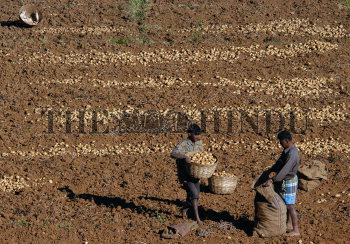 Caption : Farmers havest POTATOES in Ithalar , Udagamandalam in Tamil Nadu. With nearly 60 per cent of the area in the country under potato cultivation, contract farming for potato is prevalent mostly producing potatos for processing companies. In addition to traditional pototo products like potato papads, waries and laccha, western version like potato chips and french fries also find huge export pottential. Potato in the country is more than Rs 100 billion industry. India is the third largest producer of pototo after China and Russia. Photo: K.K. Mustafah 8/1/2006