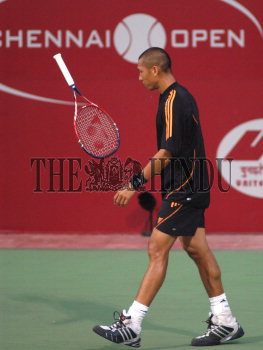 Caption : Paradorn Srichaphan of Thailand slips down his tennis racquet during his match against Kristof Vliegen (not in pic) of Belgium in the quarterfinals of the Chennai Open tennis championship at the Nungambakkam Stadium in Chennai on January 06, 2006. Photo: Vino John