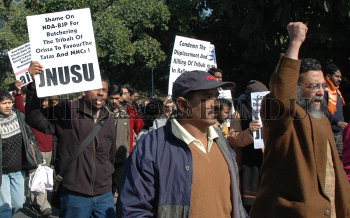 Caption : Activists of different NGOs holding demonstrations near Orissa Bhavan in New Delhi on January 06, 2006, protesting against the killing of adivasis at Kalinganagar, Twenty one adivasis were killed in a police firing during a protest against the Bhumi Pujan of the boundary wall of the proposed Tata Steel Plant at Kalinganagar in Orissa on January 02, 2006. Photo: Rajeev Bhatt