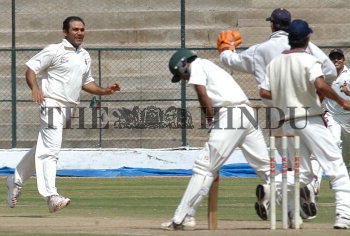 Caption : Karnataka batsman Sudhindra Shinde is caught by wicketkeeper Varun Kumar off the bowling of Virendra Sehwag on the first day of the Ranji Trophy Elite Group A cricket match between Delhi and Karnataka at the Chinnaswamy Stadium in Bangalore on January 3, 2006. Photo: K. Bhagya Prakash