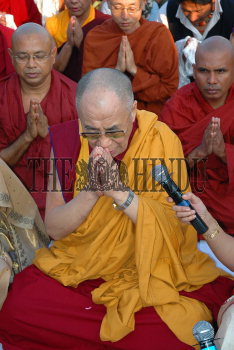 Caption : His Holiness the 14th Dalai Lama, chanting Buddhist hymns after consecrating the 17 metre tall and 350 tonnes monolithic BUDDHA STATUE on the Rock of Gibralter, in the middle of Hussainsagar, in Hyderabad, on January 02, 2006. Photo: Mohammed Yousuf