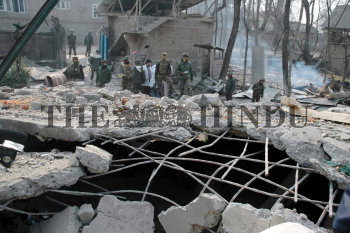 Caption : Army soldiers standing near the debris of flattened houses which were destroyed in an encounter between the security forces and militants at Khrew in Dist Pulwama- some 35 from Srinagar on December 28, 2005. Three top militants of Jash-Muhammad group were killed in the night long gunbattle. Photo: Nissar Ahmad