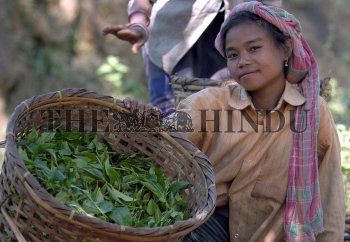 Caption : A tribal woman rests with the plucked tea leaves at Machmara Tea garden in North Tripura district. The state has about 60 tea estates and 4,346 small tea growers, producing about 7.5 million kg. of tea every year. Unlike Assam, tea industry was not started by British here but under Royal Administration in the beginning of 20th Century by people of East Bengal. Tripura is the 5th largest, among the 14 tea producing states, after Assam, West Bengal, Tamilnadu