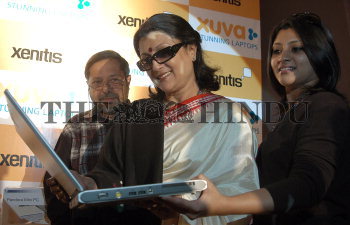 Caption : Noted film actress and director Ms. Aparna Sen and her daughter Konkona Sen Sharma along with Mr. Manabendra Mukherjee, Minister of Information Technology of West Bengal unveil the new Xuva range of laptops from Xenitis Infotech Pvt. Ltd. in Kolkata on December 27, 2005. The laptops are powered by Intel Centrino Mobile Technology with two different operating systems, Windows XP and Linux. The laptops are being assembled in the PC manufacturing factory at Kodalia, Hooghly in West Bengal. The laptops will be priced at Rs. 29,000 to Rs. 59, 000. Photo: A. Roy Chowdhury