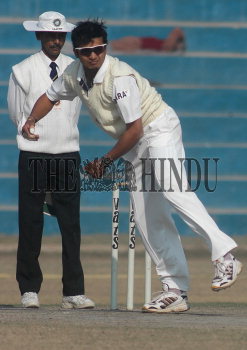 Caption : Railway's Murali Karthik, who claimed five wicket, in action during the Ranji Trophy cricket match between Delhi and Railways at the Karnail Singh stadium in New Delhi on December 25, 2005. Phoo: Rajeev Bhatt