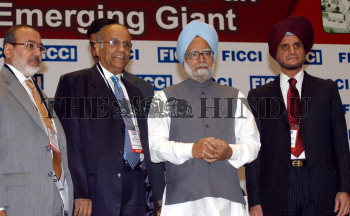 Caption : The Prime Minister, Manmohan Singh (second right), at the 78th Annual General Meeting of the Federation of Indian Chambers of Commerce and Industry (FICCI) in New Delhi on December 24, 2005. Also seen are (from right), the President of FICCI, Onkar S. Kanwar, the President-elect of FICCI, Saroj K. Poddar, the Vice-President of FICCI, Habil F. Khorakiwala. Photo: V.V. Krishnan