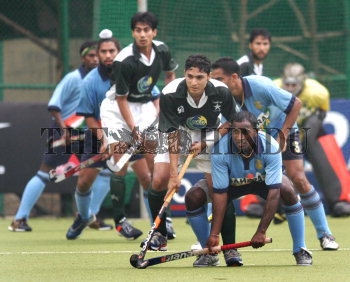 Caption : A tense moment at the India's goal mouth as Vikram Pillay of India and Tariq Aziz of Pakistan wait for the ball during the match for the fifth and sixth positions between India and Pakistan in the six-nation Champions Trophy hockey tournament at the Mayor Radhakrishnan Stadium in Chennai on December 18, 2005. Photo: Vino John