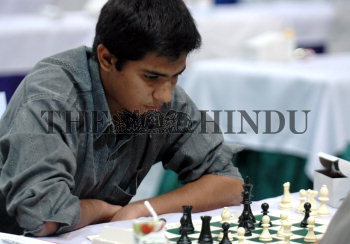 Caption : Pooria Darini of Iran ponders his next move against Y. Sandeep (not in pic) during their game in the boys under-14 division in the Parsvnath Asian Youth chess championship at the Indira Gandhi Stadium in New Delhi on December 14, 2005. Photo: Rajeev Bhatt