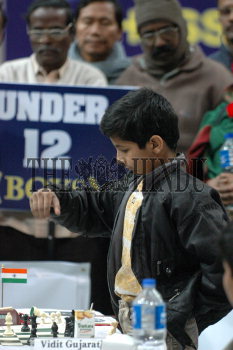 Caption : Vidit Gujarathi, who won the boys under-12 silver medal, about to make a move against S.P. Sethuraman during their game in the Parsvnath Asian Youth chess championship at the Indira Gandhi Stadium in New Delhi on December 14, 2005. Photo: Rajeev Bhatt