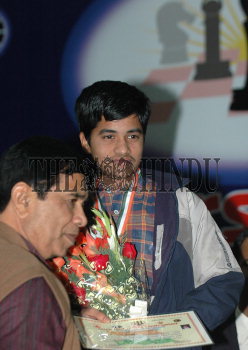 Caption : Y. Sandeep, who won the boys under-14 silver medal, poses for a photograph with the trophy and certificate as Union Minister Oscar Fernandes looks on during the Parsvnath Asian Youth chess championship at the Indira Gandhi Stadium in New Delhi on December 14, 2005. Photo: Rajeev Bhatt