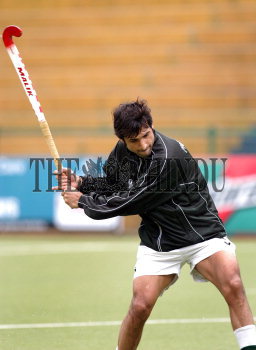 Caption : Pakistan captain Muhammad Saqlain about to hit a ball at a practice session during the six-nation Champions Trophy hockey tournament at the Mayor Radhakrishnan Stadium in Chennai on December 16, 2005. Photo: Vino John