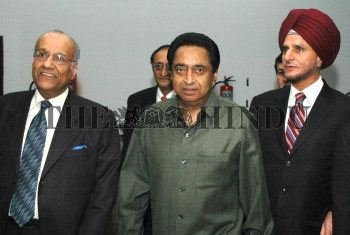 Caption : The Union Minister for Commerce and Industry, Kamal Nath, flanked by the president of the Federation of Indian Chambers of Commerce and Industry (FICCI), Onkar S. Kanwar (right) and the FICCI president-elect, Saroj K. Poddar, during the 78th Annual General Meeting on "Trade, Globalization and WTO: Hong Kong and Beyond", in New Delhi on December 23, 2005. Photo: Rajeev Bhatt