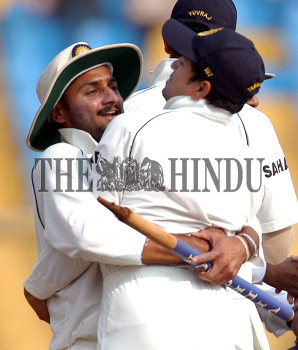 Caption : India's Harbhajan Singh, who claimed 10 wickets in the match, celebrates with Sachin Tendulkar after India beat Sri Lanka by 259 runs in the third and final cricket Test match at the Sardar Patel Stadium in Motera, Ahmedabad on December 22, 2005. India won the three-Test series against Sri Lanka by 2-0. Photo: Shaju John