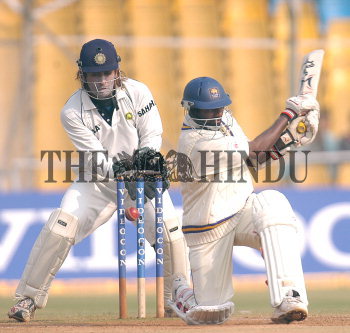 Caption : Sri Lankan batsman Muttiah Muralitharan is bowled by India's Harbhajan Singh (not in pic), watched by wicketkeeper M.S. Dhoni, on the last day of the third and final cricket Test match between India and Sri Lanka at the Sardar Patel Stadium in Motera, Ahmedabad on December 22, 2005. India won the match 259 runs and the three-Test series by 2-0. Photo: Shaju John