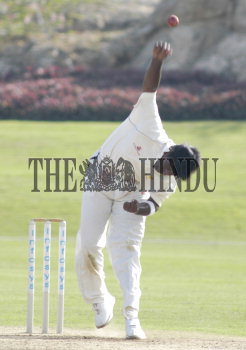 Caption : Karnataka bowler Dodda Ganesh in action during the Ranji Trophy Elite Group A cricket match between Bengal and Karnataka at the Infosys Grounds in Mysore on December 17, 2005. Photo: K. Bhagya Prakash