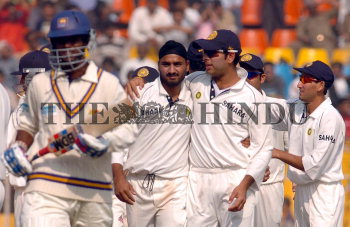 Caption : Indian spinner Harbhajan Singh celebrates with Yuvraj Singh, Ajit Agarkar and other teammates after taking the wicket of Sri Lankan batsman Marvan Atapattu (not in pic) on the fourth day of the third and final cricket Test match between India and Sri Lanka at the Sardar Patel Stadium in Motera, Ahmedabad on December 21, 2005. Non-striker Upul Tharanga is also seen. Photo: S. Subramanium