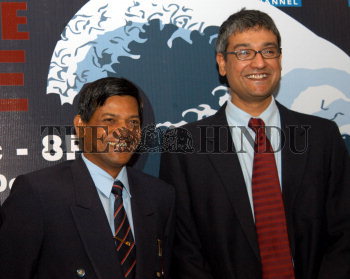 Caption : Dr. Baban Ingole, Marine Biologist at National Institute of Oceanography with Mr Raja Balasubramanian, Brand Director, Discovery Networks India addressing the press in Mumbai on December 21, 2005 explaining how Discovery Channel funded an expedition of top scientists from around the world to explore the seabed site of the Asian tsunami - an unprecedented attempt to uncover and comprehend the causes and the fast- fading evidence of the 2004 tsunami. Discovery Channel will present the entire expedition on Discovery Channel titled Unstoppable Wave on Sunday, December 25th at 8pm. Photo: Paul Noronha