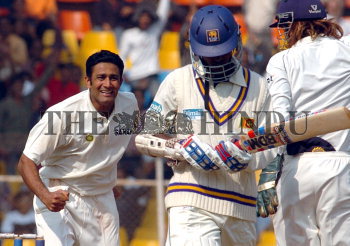 Caption : Anil Kumble of India exults after dismissing Sri Lankan batsman Upul Tharanga as wicketkeeper M.S. Dhoni rushes to greet the bowler on the fourth day of the third and final cricket Test match between India and Sri Lanka at the Sardar Patel Stadium in Motera, Ahmedabad on December 21, 2005. Photo: S. Subramanium