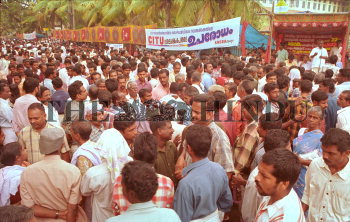 Caption : Centre for Indian Trade Unions (CITU) activists laying siege to the Alappuzha Collectorate on December 20, 2005. The CITU workers in Kerala are organising a State-wide protests by laying siege to the Secretariat, Collectorates and Taluk offices against the 'anti-labour policies' of the Congress-led UDF Government in the State. Photo: C. Ratheesh Kumar