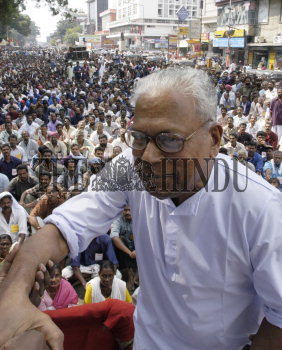 Caption : The Leader of the Opposition in Kerala Assembly V. S. Achuthanandan, is on his way to inaugurate the siege to the Kerala Secretariat called by the Centre for Indian Trade Unions (CITU) in Thiruvananthapuram on December 20, 2005. The CITU workers in Kerala are organising a State-wide protest by laying siege to the Secretariat, Collectorates and Taluk offices against the 'anti-labour policies' of the Congress-led UDF Government in the State. Photo: C. Ratheesh Kumar