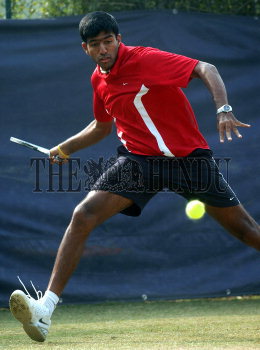 Caption : Rohan Bopanna in action on his way to victory against Tushar Liberhan in the first round of the State Bank of Saurashtra National grass court tennis championship at the DSOI Complex, Dhaula Kuan in New Delhi on December 20, 2005. Photo: Sandeep Saxena