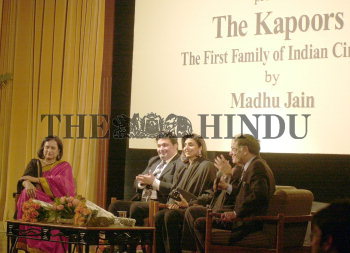 Caption : Film stars, Shashi Kapoor along with his family Rishi Kapoor and Nitu Singh during the release of a Book "The Kapoors - The First Family of Indian Cinema", authored by Madhu Jain (left), at India Habitat Centre, in New Delhi, on December 16, 2005. Photo: Shiv Kumar Pushpakar