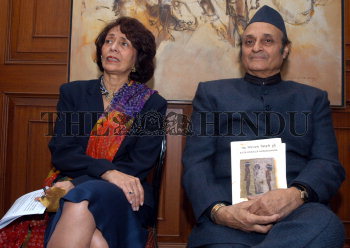 Caption : Dr. Karan Singh, MP. with Milena Santana Ramirez, Ambassador of the Bolivian Republic of Venezuela, during the release of "Anthology of Latin American and Caribbean Poems" at a function, in New Delhi, on December 19, 2005. Photo: Shanker Chakravarty