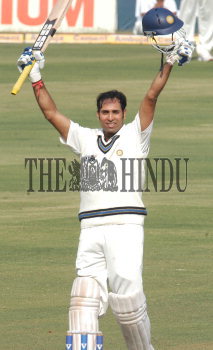 Caption : Indian batsman V.V.S. Laxman celebrates after scoring his century on the second day of the third and final cricket Test match between India and Sri Lanka at the Sardar Patel Stadium in Motera, Ahmedabad on December 19, 2005. Photo: Shaju John