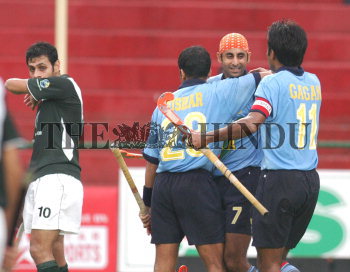 Caption : Prabhjot Singh (7) of India celebrates with teammates Gagan Ajit Singh (ext right) and Tushar Khandekar after India's first goal against Pakistan in the match for the fifth and sixth places between the two teams in the six-nation Champions Trophy hockey tournament at the Mayor Radhakrishnan Stadium in Chennai on December 18, 2005. Photo: Vino John