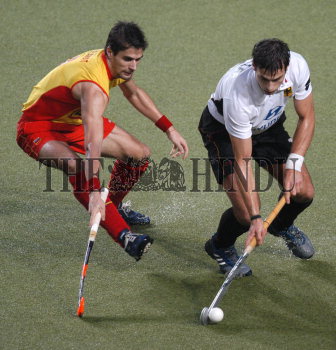 Caption : Spanish player Pol Amat (left) and Niklas Meinert of Germany fight for the ball during a match for the third and fourth places in the six-nation Champions Trophy hockey tournament at the Mayor Radhakrishnan Stadium in Chennai on December 18, 2005. Spain beat Germany by 5-2 to secure the third place in the tournament. Photo: Vino John