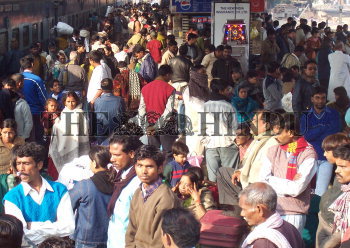 Caption : As heavy fog engulfs many parts of north India,Passengers waiting for the Train as rail traffic was thrown out of gear. Passengers have been left stranded in major rail stations such as the one at New Delhi Railway Station. Photo: Sushil Kumar Verma 18-12-2005