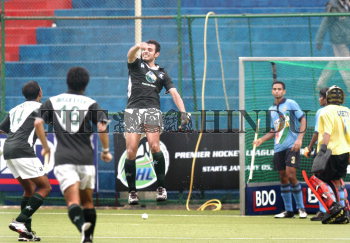 Caption : Rehan Butt of Pakistan unable to hide his joy after slotting in a goal against India during the match for the fifth and sixth places between the two teams in the six-nation Champions Trophy hockey tournament at the Mayor Radhakrishnan Stadium in Chennai on December 18, 2005. Photo: Vino John